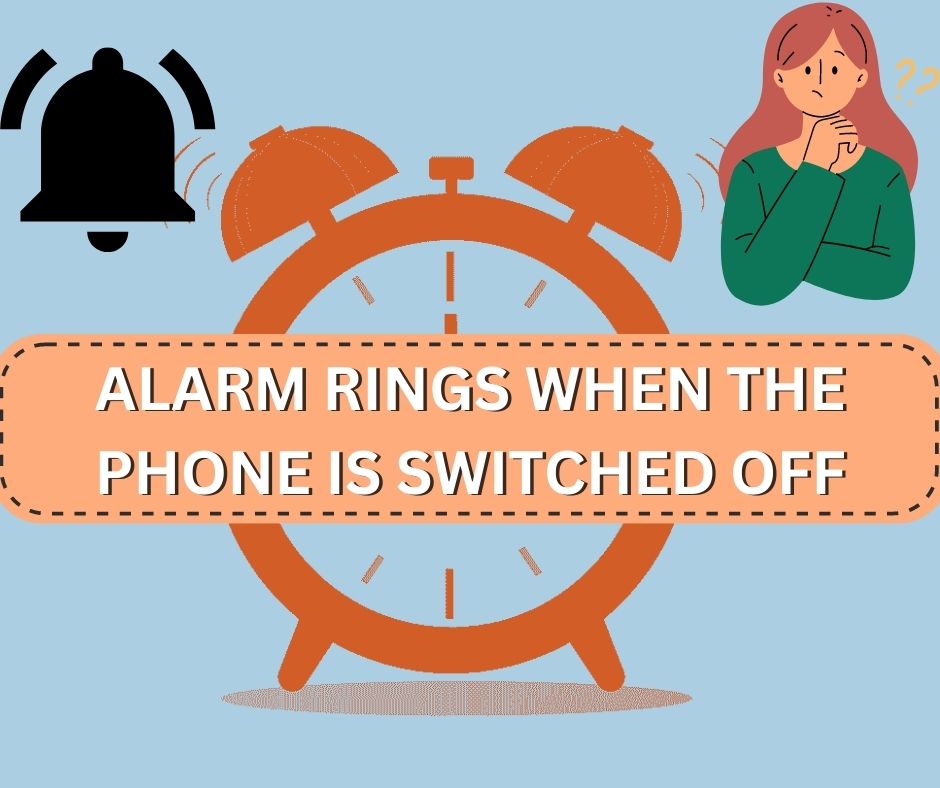 In your phone when you set up an alarm, then its information gets stored in the phone’s internal memory. This includes the time to ring the alarm and other additional settings, such as the tone of the alarm and its snooze duration.

When the alarm ringing times arrive then the phone’s internal clock (which is a separate part from the rest of the phone’s operating system) continuously tracks the time and gets triggered when the set time arrives. So, when your phone is switched off, the internal clock continues to operate which allows the alarm to function as intended.

Reason of alarm not ringing when phone is switched off

However, it’s not always necessary that the alarm will always ring when your phone is switched off. It has certain limitations. For example:

When your phone battery is completely drained then the alarm may not ring as the phone will not have sufficient power to trigger the alarm. So in this case even though the internal clock may be running, the phone doesn’t have the power to perform any action.

If your phone has been switched off due to some hardware issue such as damaged charging port in that case the alarm may not work. This can happen because the phone’s internal components may not be functioning properly. Here it may be possible that the internal clock may be running, but the phone may not be able to access or use the alarm function due to the damaged hardware.

Your phone relies on various sensors and external sources (such as network signal and GPS) to keep the phone’s internal clock accurate. But when the phone is powered off then these external sources and sensors don’t work. This can bring inaccuracy in the internal clock of your phone compared to when it is on. As a result the clock may drift slightly over time, which in turn results in triggering the alarm at a slightly different time than intended.

Ways to ensure that the alarm function properly even switch off mode.

You can follow the below given ways to ensure that the alarm on your phone works even when your phone is in switch off mode:

If you have any damaged components in your phone such as damaged charging port, battery or any other internal hardware, consider repairing them from an authorized service center. As damaged hardwares can prevent the phone from functioning properly and cause the alarm to fail.

If it’s really important for you to get up on time. Then it is always a good idea to have a backup alarm system in your room. This will ensure that even if your phone’s alarms fail to ring due to any reason then the backup alarm will ring to make you up.

This backup alarm system could be anything such as

If you are someone who do get up even when your alarm rings 😅. Then here are some alarm apps that will force you to wake up 😹 even if you don’t want 🙂.

Best alarm 🚨 apps to use

Below given is the list of some of the alarms apps that offer a wide range of features and customization options. Some of the best alarm apps include:

This app, also known as “Sleep If U Can,”. The app is designed in a way to be difficult to snooze, making it ideal for those who are heavy sleepers. In this app you can set alarm 🚨 in different modes. Such as it has a shake mode mode where you have to shake your phone a certain number of times to turn off the alarm. You can set up that number count while setting up the alarm. Another such mode is math mode where you have to solve a math problem to turn off the alarm.

This app is designed in such a way that it uses your phone’s accelerometer to track your sleep patterns. Thus it wakes you up during the lightest sleep phase, which is supposed to make you feel more refreshed. Also like any other alarm apps it offers a snooze function, and other features to track your sleep quality over time.

There are many alarm tones and themes available in this app. So you can choose the one which suits you the most. Apart from this it has a “smart wake” function that gradually increases the volume of the alarm tone over time to gently wake you up. Some of its other features include a weather forecast for the day and a news briefing for you.

This alarm app also offers different types of alarm tones and themes to choose from. But it comes with a “challenging” alarm mode where you have to complete a series of tasks in order to turn off your alarm. This app also includes a sleep timer and a “bedtime calculator” that helps you determine the best time to go to bed.

One request from you: If I am able to address your query successfully and if you liked this article then don’t forget to mention your views in the comments. As it motivates me to make such more amazing and informative content for you. Also if possible consider sharing this😊👍.

How do I set an alarm for a specific location?

To set up an alarm for a specific location, you can use a location-based alarm app such as Alarm Me. These location based apps allow you to set an alarm that will trigger to ring when you reach a certain location, such as your workplace or home.

There are some people who asks weird or unusual questions about alarms that you might find interesting:

Can I use a banana as an alarm clock?

Technically, it is possible to use a banana as an alarm clock, but it would not be a reliable method to use. A banana can be used as an alarm clock only if you attach a small device, such as a vibration motor or piezo buzzer to it and set it to ring at a certain time. But it is possible that the banana’s texture and moisture content could cause the device to malfunction or fail to trigger the alarm properly.

Can I use my pet as an alarm clock?

I don’t recommend you to use your pet as an alarm clock. While it might be interesting to have your dog or cat wake you up in the morning. But you might need to train your pet for this purpose which might be difficult for you.

Can I use my phone’s flashlight as an alarm?

Yes, it is possible to use your phone’s flashlight as an alarm. But you need to install some apps like “flashlight alarm”.

Can I use my phone’s camera flash as an alarm?

Yes, it is possible to use your phone’s camera flash as an alarm. But you need to install some apps like “flashlight alarm”.

Can I use my phone’s vibrate function as an alarm?

Yes, you can use the phone’s vibrate function as an alarm. It can be a good option for those who are sensitive to loud noises or who need to wake up quietly, such as in a shared bedroom or at work.  You need to select the “none” option in the ringtone and activate the vibrate option which you find there.